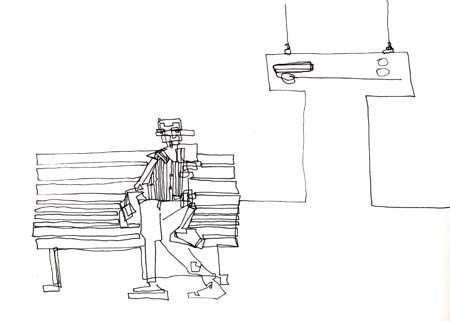 Was waiting for a train in St Leonards. Saw myself in the reflection of some windows or something opposite, so thought, ‘may as well draw myself for a change’. Not that I could use this for ID purposes. I can’t quite remember if it’s the case but I tried to do this as one line from beginning to end.

View my online store at Etsy 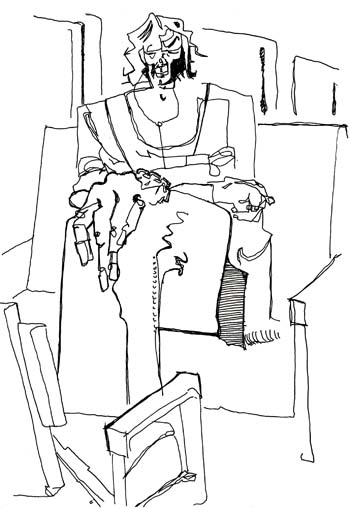 This is actually two people. The first got up and left, so I borrowed another person’s head. Sort of grafted it on. Not sure if it works. Some people say it looks evil.

Walcha’s Got Everything (pen and ink wash) 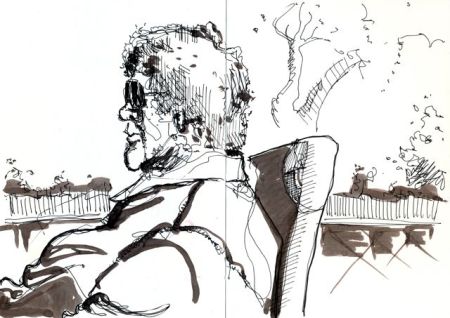 I drew this at the Gunnedah markets, in the same session as the Apple Eater lady. In this instance, the subject was a stall owner who was chatting to a companion. They were lamenting the sorry state of affairs in the locality, whereby the neighbouring town of Walcha allegedly receives every benefit imaginable to mankind while their locality does it hard. I can’t comment other than to say that either is a nice place to visit. Had a flying saucer landed in the middle of the markets, her response would have been, “a bigger one landed in Walcha last week.” Behind it all, she was having the time of her life, though.

In this sketch, I did my best to capture her weathered, somewhat resigned and slightly laconic disposition.